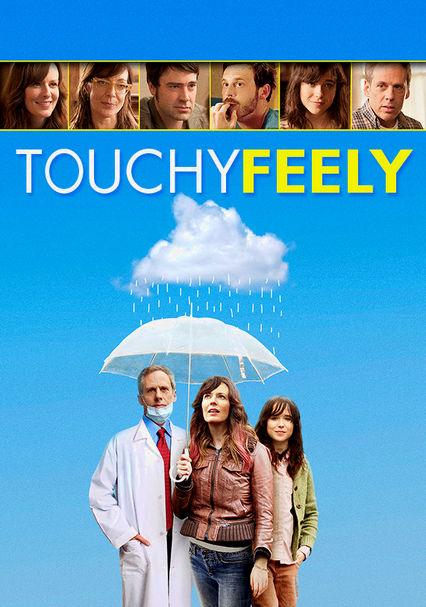 Parents need to know that Touchy Feely is an indie drama about an adult brother and sister and their problems connecting with others. In the movie, both characters wind up taking Ecstasy and having a very positive experience from it; it practically solves their problems, and the movie doesn't show any negative consequences -- which could be interpreted as advocating the drug's use. Sex is also an issue: A couple is shown sneaking into a bathroom and having sex, though no graphic nudity is shown. There's some strong language, including two uses of "f--k" and one "s--t." Violence isn't much of an issue except for a scene in which a dental patient throws a temper tantrum in a waiting room. A tiny amount of blood is shown in a scene in the dentist's chair. Ultimately, this is a very strange, unsatisfying movie that's aimed at adults and is unlikely to appeal to many teens.

A couple has sex in a bathroom. They're shown from the chest up, fully clothed, but they're clearly having sex. Sex noises are heard outside the bathroom door. In another scene, the woman asks the man to take his shirt off, and he does, but she leaves before it goes any further. Two ex-lovers run into each other at a park and discuss an old sexual encounter. The movie opens on a close-up of a massage, but it's more naturalistic than sensual.

In one scene, an angry customer barges into a dental office and rants about having been ripped off. He hyperventilates, passes out, recovers, and leaves without actually touching anyone. In another scene, a boyfriend and girlfriend share a mildly agitated conversation. A dentist accidentally hurts one of his patients, and a little blood is shown in his mouth.

"F--k" is heard twice, and one of those times is half-heard, shouted from another room. Other language includes infrequent use of "s--t," "goddamn," and "dumbass."

It's not clear what this movie is trying to say, other than that people need to connect with one another. And it more or less advocates the use of Ecstasy, as two adult siblings use the drug with positive experiences and no repercussions.

Two adult characters take Ecstasy and it affects them in a positive way, putting them more in touch with their inner selves and enabling them to relate to others in a new way. The movie ends on the positive effects of this drug, with no downside; it more or less advocates using it. Characters are also occasionally shown drinking wine with dinner and smoking cigarettes outside a nightclub.