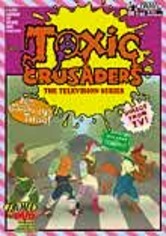 1991 NR 2h 0m DVD
Toxie and his team of supersized, toxic mutants fight to save Tromaville and the entire world from malevolent alien Dr. Killemoff in this collection of "Toxic Crusaders" episodes. Join the ecological crime-fighters as they clean the floors with the noxious Doc and his superstinky thugs from planet Smogula. The video includes the animated show's first three installments, newly released footage, two bonus cartoons and plenty of other extras.