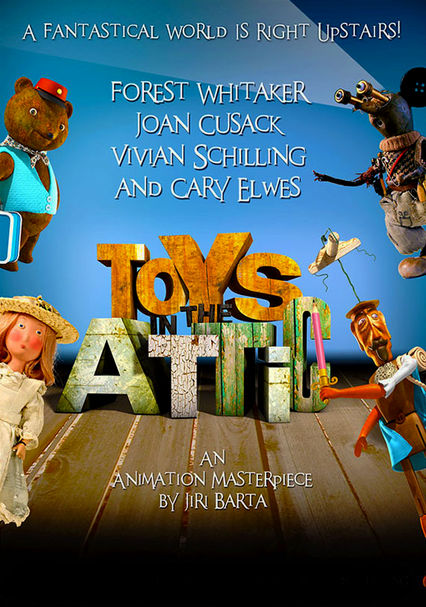 2009 PG 1h 18m DVD
When a pretty blonde doll named Buttercup is captured by an evil villain known as the Head, her toy friends -- including a teddy bear, a mechanical mouse and a marionette -- band together to bring her back home to their side of the attic.

Parents need to know that Toys in the Attic is the English-dubbed version of a 2009 Czech film. A combination of stop-action and live-action characters, the movie is too menacing -- and some of the creatures too frightening -- for younger moviegoers. While the "secret life of toys" set-up might sound like Toy Story, the characters can be downright creepy, and the evil Head (who smokes cigars) incredibly disturbing (he's obsessed with kidnapping an antique doll and forcing her to do his bidding). Tweens with a sophisticated film palate or an interest in stop-action animation will be intrigued, but it's not for younger kids.

Some sinister sexual undertones to the way the Head treats Buttercup; he asks her to give him a kiss (on the forehead) and forces her to spoon-feed him.

There's a menacing tone to much of the film, particularly the parts concerning the Head, the black cat, and the rest of their allies. Buttercup is kidnapped by the Head's minions, including a rogue cat and a swarm of creepy crawlies. A toy made out of clay is squashed but can reform himself.

The movie's message can be perceived as a tribute to unconditional friendship and the lengths that true friends will go to in order to rescue someone they love.

The Head smokes a cigar.