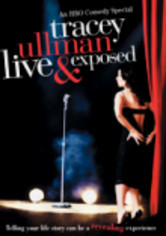 2005 NR 1h 15m DVD
English comedienne Tracey Ullman first gained national fame in the United States via her comic tour de force playing a host of characters in "The Tracey Ullman Show," which aired in 1987. In this stand-up performance, the multitalented Ullman sums up the highs and lows of a varied career that includes appearances in films (Plenty) as well as sitcoms ("Girls on Top"). She also draws on characters from her hit HBO show "Tracey Takes On."