Tracey Ullman's State of the Union 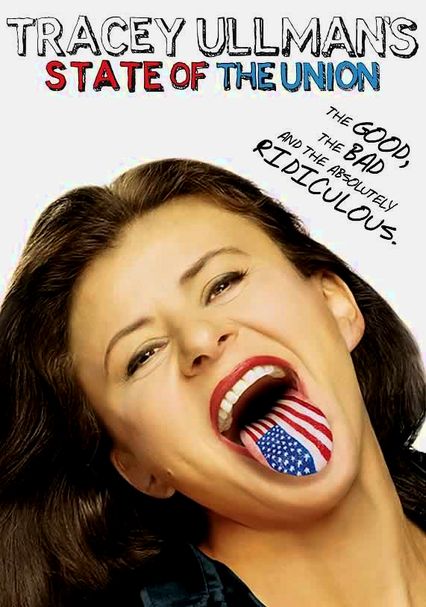 Tracey Ullman's State of the Union

2008 TV-MA 2 seasons
British comedian Tracey Ullman employs her wicked impersonation skills, impeccable timing and satirical genius in this Showtime series that lampoons American tendencies to hero-worship celebrities and blindly follow media pundits. Ullman vividly inhabits the famous, from Arianna Huffington to David Beckham, as well as mere mortals, such as a Bollywood-happy pharmacist, an irate flight attendant and a homeless woman in need of health care.

British comedian Tracey Ullman returns for another season of outrageous satire in this award-winning sketch comedy show that skewers American culture and politics, with Ullman herself impersonating the lion's share of her celebrity targets.

Parents need to know that, in typical sketch-comedy fashion, the content of this series is somewhat unpredictable from episode to episode. Not every character swears like a sailor, but many do (and the words are all uncensored). The jokes aren't always sexually charged, but when they are, they're no-holds-barred. In short, this isn't a show that's meant for kids, so parents who allow older teens to watch should be vigilant. Ullman, who is white, also occasionally appears in heavy make-up to portray people of color, which could offend some viewers. That said, she's an equal-opportunity offender because she makes fun of just about everyone.

Nothing hardcore, but there's plenty of suggestive content: A female reporter offers to trade sexual favors for an exclusive story; two co-workers who are married (and not to each other) are shown rolling around in their underwear on top of an office conference table; a character jokes about Viagra, etc.

Violence is usually implied rather than demonstrated, but characters are shown with guns. A few skits mention the war in Iraq.

The swearing isn't constant, but the list of words (including "f--k," "s--t," "piss," "bastard," and the phrase "suck my c--k") is pretty extensive -- and they're all unbleeped because it's pay cable.

Most characters have serious personality flaws that are amplified -- and celebrated -- in the name of comedy. Savvy older teens might appreciate the satire, but younger kids probably won't get the joke. Ullman often dons heavy makeup to portray (and mock) people of other races and ethnicities -- but she mocks them all equally.

If you consider celebrity personas to be products, you'll be seeing plenty, from Helen Mirren to Arianna Huffington.