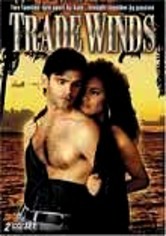 1993 NR 2 discs
When Maxine Philips (Michael Michele) and Ocean Sommers (Michael McLafferty) meet and fall in love in this epic miniseries, they face a huge obstacle: Their families are bitter rivals, engaged in a long-standing power struggle on the Carribean island of St. Martin. But when Maxine's brother is killed and Ocean is accused of his murder, long-buried secrets that threaten to destroy everyone rise to the surface. Efrem Zimbalist Jr. co-stars.