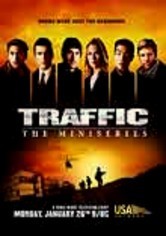 2004 NR 2 discs
Director Stephen Soderbergh's film Traffic was based on a British miniseries. Like the film, this U.S. miniseries details the very complicated -- and often deadly -- path that drugs take from their countries of origin. Elias Koteas and Martin Donovan star as DEA agents taking down a drug operation in Afghanistan. Meanwhile, an Ivy League graduate (Balthazar Getty) discovers that his father has ties to the Chinese underworld.