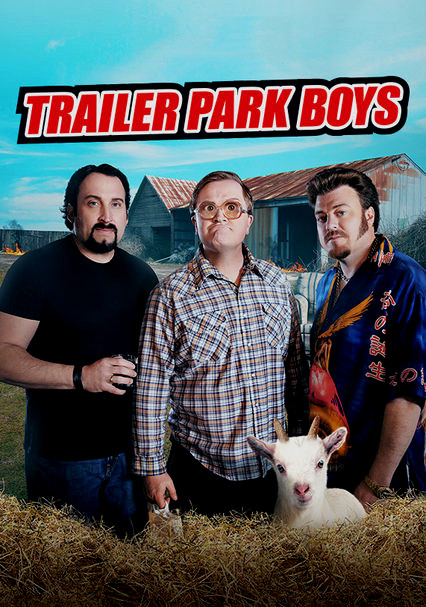 2001 TV-MA 6 seasons
This wickedly funny mockumentary series follows the booze-fueled misadventures of Julian (John Paul Tremblay), Ricky (Robb Wells) and Bubbles (Mike Smith), longtime pals and petty serial criminals who run scams from their Nova Scotia trailer park -- when they aren't in jail, that is. But kudos to the lads for their persistence, even if their harebrained get-rich schemes involve growing pot right under the nose of ex-cop Jim (John Dunsworth).

This innovative Showcase mockumentary series opens in a blaze of glory as it introduces pals Ricky (Robb Wells) and Julian (John Paul Tremblay), who are just out of jail and back in their trailer-park neighborhood in Nova Scotia. Much as the pair would like to make something of themselves, this collection of episodes from the first two seasons proves how hard it is for them to stay out of trouble. Extras include cast commentary and photo galleries.

As Ricky and Julian, Robb Wells and John Paul Tremblay are back on the streets again after yet another prison stint -- and as usual, their attempts to follow the straight and narrow fall completely flat. Watch as the pair and the rest of their friends vie for the job of Temporary Relief Assistant Trailer Park Supervisor, hatch a plan to resell barbecues, and dip their toes into petty crimes, like selling pirated CDs.

Julian (John Paul Tremblay), Ricky (Robb Wells), Bubbles (Mike Smith) and the rest of the Sunnyvale Trailer Park gang continue their crazy -- and often illegal -- adventures in Season 4 of this comic mockumentary series set in Nova Scotia. This time around, Ricky becomes the park's unscrupulous supervisor, Bubbles wrestles as "the Green Bastard," and the boys scramble to harvest their plants before Mr. Lahey gets wind of their activities.

The sixth season of this comedy series finds Ricky (Robb Wells) getting out of jail and reuniting -- well, sort of -- with Lucy. Julian (John Paul Tremblay) is also back from the slammer, armed with a nest egg he earned in prison selling homemade potato vodka. Elsewhere in the Sunnyvale Trailer Park, Bubbles (Mike Smith) goes into business with the aptly named Kittyland Love Centre, a combination cat day care and theme park.

Dim-witted ex-con buddies Julian (John Paul Tremblay), Ricky (Robb Wells) and pal Bubbles (Mike Smith) are back for more hilarity in the seventh season of this mockumentary comedy series. This year finds the boys hatching an elaborate plan to smuggle marijuana across the border into the United States, where they'll turn a bigger profit. Along the way, they meet Skid Row front man Sebastian Bach, who unexpectedly becomes a customer.