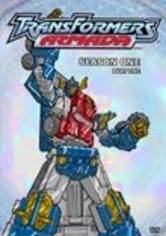 2002 NR 4 discs
In the not-so-distant future, a mighty clash between feuding robot forces rages on, as the power-hungry Decepticons try to wrest control of the planet from the peaceful Autobots by enslaving a new breed of transformer called the Mini-Cons. With the ability to connect to larger robots, the Mini-Cons hold the potential for great power, a potential Decepticon leader Megatron plans to capitalize on in his maniacal quest for total domination.