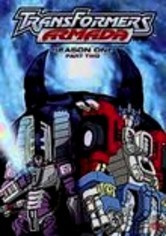 2006 NR 4 discs
It's robots against robots -- with a few human allies thrown in for good measure -- in this animated series that has rival Transformers fighting for control of the Mini-Cons. An unholy alliance between natural enemies forms as both Optimus Prime (leader of the Autobots) and Megatron (leader of the Decepticons) try to win the allegiance of the tiny Mini-Con Transformers, which can enhance their power exponentially.