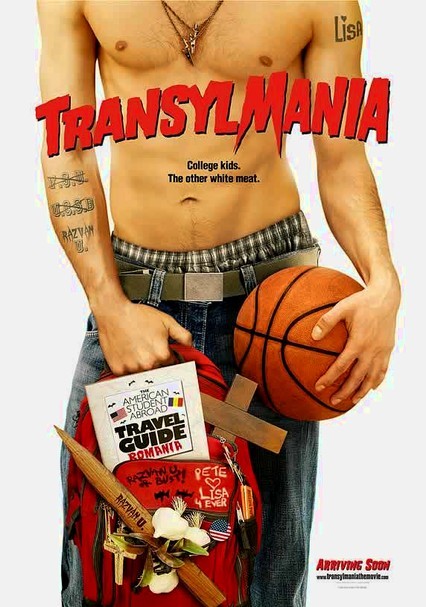 2009 UR 1h 37m DVD
Deep in the heart of Transylvania lies Razvan University, where a contingent of visiting American students is about to get the shock of a lifetime as they unwittingly resurrect a powerful ancient vampire in this goofy spoof.

Parents need to know that Transylmania is a crude, stupid vampire "comedy" with lots of sex, drugs, swearing, and cartoonish violence -- which means it's precisely the kind of movie that younger teens (particularly boys) will try to sneak into after buying tickets for something else. All of the so-called humor is either vulgar or juvenile, and scenes include everything from "humorously" bloody fights and dismemberments to bare breasts to broad stereotypes to frequent use of words like "s--t" and "f--k." The best that can be said for it is that it's more stupid than it is mean. Also, there is an unrated version of this film available on dvd, this review is for the rated versions shown in theaters.

Non-stop sex talk, most of it crude. Several topless females, as well as inflatable sex dolls. Plenty of kissing. Teenagers have simulated sex, but it's completely hidden under the covers. There's a joke about premature ejaculation, as well as ejaculate on a computer screen. One male character shows his bare behind, which is partially obscured (his front is totally obscured). Viewers see pages of a sexual manual, as well as sexy drawings. Fake prosthetic body parts (such as a large, single breast on one girl's chest). Most of the female characters wear revealing clothes, with lots of exposed cleavage. Crude songs with sex-related lyrics.

Lots of comical fantasy violence played for laughs. Vampires get staked in the heart, and other characters get hit with crossbow arrows (complete with lost limbs and spurting blood). One girl loses her head, and her body is chopped up, stitched back together, unraveled, and stitched together again. There are also guns and swordfighting, as well as various martial arts and hand-to-hand combat between vampires and vampire hunters. In one scene, vampires use a human as a keg, with a tap connected to his torso.

Frequent use of "s--t" in all its forms, as well as many uses of "f--k." Also words like "bitch," "whore," "goddamn," "ass," "t-ts," "balls," "hump," "douche bag," "bastard," "fudge-packer," "spanking your pud," and more. Characters raise the middle finger and use insults including "moron" and "idiot." One joke involves a priest with Tourette's syndrome who curses a blue streak during a funeral.

The movie starts with some cultural and sexual stereotypes. Characters also judge others based on physical appearance, and the movie ridicules characters with problems or flaws. Characters take drugs with no consequences.

Just a reference to Viagra.