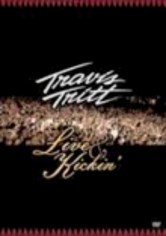 2004 NR 1h 30m DVD
This live concert film captures platinum-selling, Grammy Award-winning country music star Travis Tritt as he performs some of his biggest hits in an electrifying stage show before his huge and loyal following of fans. Songs featured here span Tritt's illustrious career and include "Love of a Woman," "Strong Enough to Be Your Man," "Put Some Drive in Your Country," "Here's a Quarter (Call Someone Who Cares)" and many more favorites.