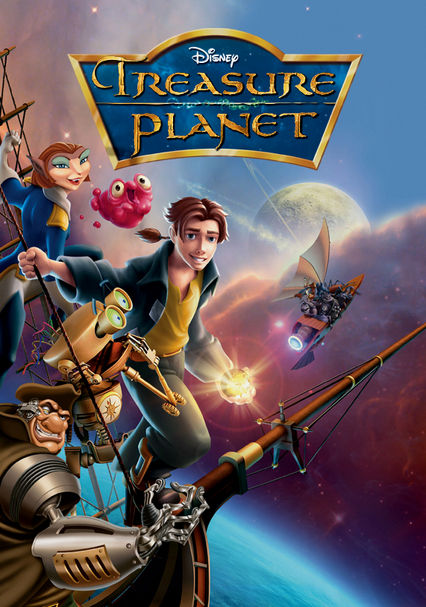 Parents need to know that Treasure Planet is a swashbuckling pirate adventure in outer space that is a delight for kids who understand the difference between reality and fantasy. Time and again, the film puts young Jim Hawkins and his treasure-hunting partners in danger. Soaring cartoon mayhem and suspense come from mighty explosions, firestorms, black holes, mutinous interspecies creatures, air battles, and multiple narrow escapes. A few featured characters die; one falls into a black hole. Lots of comedy along with the derring-do, including a creature who speaks "flatula" loud, clear, and odiferous.

Cartoon action throughout: chases, battles, falls, all manner of weaponry from the swords of centuries ago to lasers, explosions and portals leading to the unknown. Two characters die; many others are nearly killed by firestorms, falls through space, explosives, gun and cannon fire, sabotage, and toothy, clawed aliens. The creatures are more bizarre and funny than truly scary, but some have sharp claws, fangs, fiery eyes, and weapons instead of arms and legs.

A few funny scenes occur in which interplanetary characters speak "flatula" -- a barrage of farts and other bodily sounds (and smells).

Jim Hawkins learns a great deal about coming to terms with an early tragedy and overcoming grief with constructive behavior. He comes to understand the value of "charting his own course" and sticking with it. A seemingly heartless villain is redeemed, proving that change for the better is always a possibility.