Triumph of the Nerds 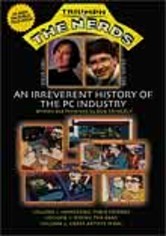 Triumph of the Nerds

1996 NR 2h 45m DVD
Robert X. Cringely's in-depth look -- via this 1996 PBS series -- examining the rise of Silicon Valley giants from nerd-dom to success is exacting in detail, providing an impressive history of personal computing. All three installments ("Impressing Their Friends," "Riding the Bear" and "Great Artists Steal") invite viewers into the lives of modern movers and shakers such as Microsoft's Bill Gates and Apple's Steve Jobs and Steve Wozniak.