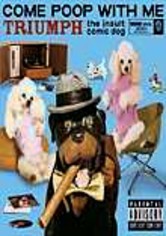 2003 NR 1h 0m DVD
Having already left his, uh, mark on TV via hilarious appearances on "Late Night with Conan O'Brien" and the "MTV Video Music Awards," Triumph the Insult Comic Dog is clawing his way into the music business. This video features live performances of such tracks as "Together in Pooping," featuring Adam Sandler, O'Brien and Jack Black, as well as interviews with MTV's Kurt Loder and Iann Robinson and comedians Janeane Garofalo and Robert Wuhl.