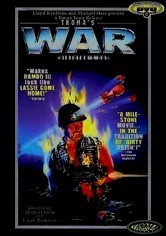 1988 NR 1h 45m DVD
In this unrated director's cut of the cult favorite, a small group of Tromaville residents are stranded on a desert island following a deadly plane crash. The lone surviving crewmember along with disparate group of fellow survivors -- yuppies, car salesmen, elderly people, and housewives -- must now work together to battle a band of terrorists who are plotting to destroy the United States by infecting the nation's citizens with HIV.