Trouble with Men and Women 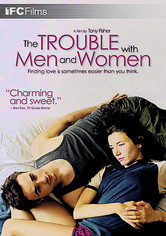 Trouble with Men and Women

2003 NR 1h 14m DVD
Heartbroken after being dumped by his girlfriend, Matt (Joseph McFadden) sets out to find a new love interest and try to understand what women want. Through a series of one-night stands and failed romances, Matt's quest leads him to the realization that the right woman for him may actually be his best friend's girl (Kate Ashfield). Writer-director Tony Fisher makes his debut with this quirky independent drama from Britain.