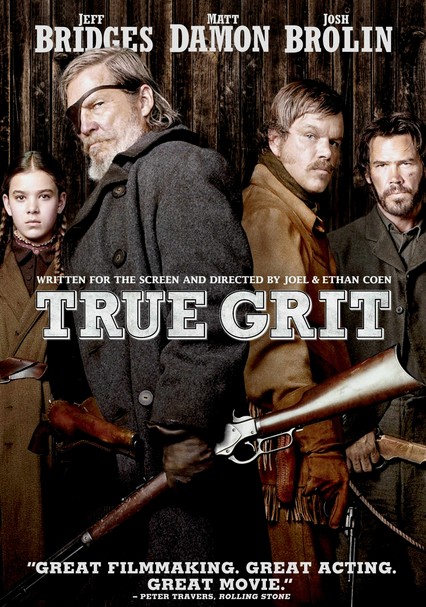 Parents need to know that the Coen brothers' adaptation of Charles Portis' novel -- which also inspired the 1969 John Wayne classic -- is impressive and forceful, but it's also full of brutal (and sometimes bloody) gunfight sequences and other violent moments that aren't appropriate for younger viewers, as well as some language and drinking (one character is perpetually soused). That said, mature teens are likely to feel a kinship with the lead character, 14-year-old Mattie Ross, who faces challenges that would break many adults. They might even learn from her adventure -- and not small-potatoes lessons, either, but ones dealing with loyalty, courage, and determination.

In one brief scene, a man makes an iffy comment to a teenage girl.

Three men are hanged in a public square while a crowd watches; later, another man's body is shown hanging from a tree (the corpse is cut down and falls heavily to the ground). In one brutal scene, a man's fingers are cut off with a knife and another man is shot in the head at very close range. Lots and lots of additional gunfights, some of which are bloody; slain bodies are on full display. A man is rough with a teenage girl. Lots of peril; some falls and near-falls.

The movie's message is that justice can be served in the right hands. Also, that you shouldn't write off a person unless you've truly given him a chance. In this case, Rooster Cogburn proves to be a good bet.

A U.S. marshal is almost always soused, even when he's gunslinging.