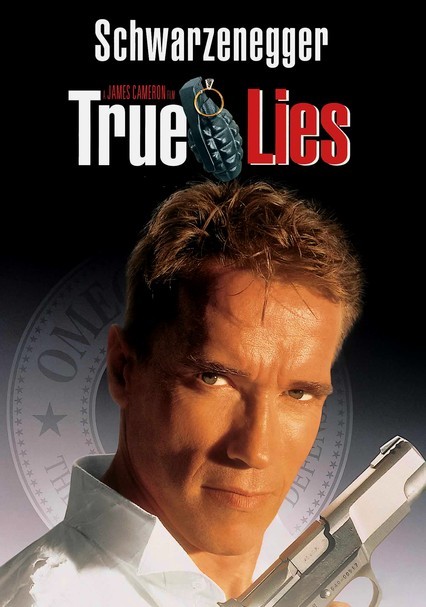 1994 R 2h 21m DVD
Special agent Harry Tasker (Arnold Schwarzenegger) is a top spy in the ultra-secret Omega Sector -- but his wife (Jamie Lee Curtis) thinks he's just a boring computer salesman. When Harry's identities collide, the Taskers find themselves in the clutches of international terrorists, fighting to save their marriage and their lives. Director James Cameron's action comedy adds romance and special effects to the Oscar-nominated mix.

Parents need to know that this entertaining thriller combines an action blockbuster (that means lots of big explosions) and a screwball comedy about a married couple who are both hiding big secrets. The wife is contemplating an affair and ends up being pressured to pretend she's a secret agent, while the husband is the real deal, a suave superspy who has convinced his family that he's actually a boring computer salesman. Not only does it deliver plenty of excitement, it also has some astute things to say about honesty and ennui in marriage. The wife performs a risqué striptease in her underwear, and there's a good deal of swearing. Also expect plenty of violence, including gunfights, car chases, some graphic hand-to-hand combat, and even a nuclear explosion.

Lots of action, including explosions, car chases, shootouts, fistfights and even a nuclear explosion. Though there's little blood or gore, the hand-to-hand sequences can be intense -- the muscular hero dispatches several villains by snapping their necks.

Honesty is the best policy in this film about a married couple that is hiding big secrets from each other. Their relationship is much improved once they both end their charades and tell each other the truth.

A few references to well-known musicians. Car logos are often visible, including a classic Corvette that plays an important role in the plot.

Some social drinking and smoking. A pack of cigarettes plays a key role in the story. One character is captured by terrorists and given a truth serum.