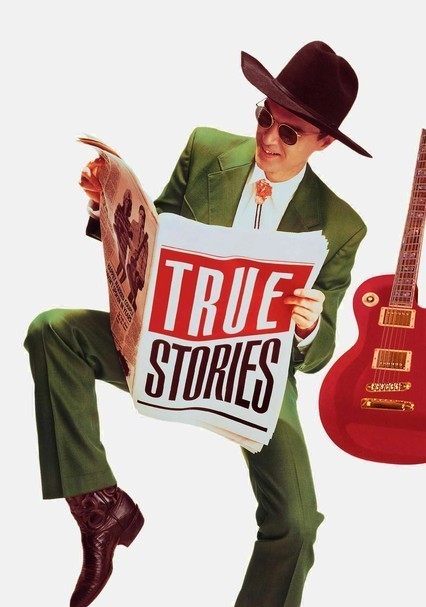 1986 PG 1h 29m DVD
Talking Heads front man David Byrne co-wrote, composed, directed and stars in this quirky musical journey into the odder side of small-town America. The residents of Virgil, Texas, are a motley crew -- from the woman who's too lazy to get out of bed (Swoosie Kurtz) to the shy man who must advertise for a wife (John Goodman). Byrne serves as our tall-hatted tour guide through the town's sesquicentennial "Celebration of Specialness."

Parents need to know that True Stories is a quirky musical written and directed by David Byrne, the front man for the band Talking Heads. Byrne encourages viewers to appreciate the oddball characters he highlights and shows how everyone is interconnected. Characters drink socially in some settings. The film is appropriate for all ages, though teens and adults will get the most out of it.

A single man seeks love, and when he finally meets the woman of his dreams, they engage in a warm, though somewhat chaste, kiss.

The people in True Stories may seem a bit too quirky to be real, but the film is celebrating the odd, the endearing, the honest, and showing how everyone is linked. Parts of the film subtly critique modern consumerism.

Several well-known brands are mentioned by name, including Apple computers and Texas Instruments. It also name-checks some major media companies such as ABC and CBS, and the venerable news show 60 Minutes.

Some scenes take place at bars, parties, and social events where people drink wine and other drinks.