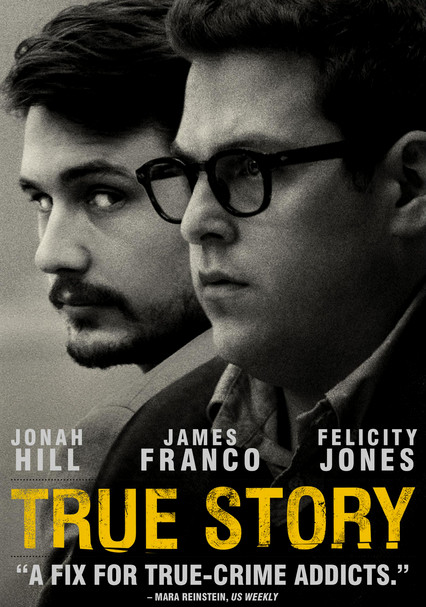 2015 R 1h 40m Blu-ray / DVD
Based on true events, this cat-and-mouse thriller follows the complex relationship between accused murderer Christian Longo and disgraced New York Times reporter Michael Finkel, whose identity Longo had usurped until he was captured by the FBI.

Parents need to know that True Story is based on real-life events, including reporter Michael Finkel's (Jonah Hill) fall from grace at the New York Times and the subsequent back-and-forth he struck up with Christian Longo (James Franco), a man found guilty of murdering his wife and their kids -- and who escaped detection by authorities by impersonating Finkel. The details are very disturbing and tough to process, especially the parts that cover the murders; autopsy photos are shown, and the victims' deaths are re-enacted (images of dead children are shown). It's also discomfiting to get into the mind of Longo, which the movie does. Expect some swearing, including "f--k" and more, and detailed descriptions of the murders.

One scene shows a man staring out a window while a woman, her back naked, is sleeping on a bed. Two men talk about one of them picking someone up and sleeping with that person.

Many creepy, menacing scenes that show how the murders were carried out. Not overtly gory, but disturbing and uncomfortable to watch: For example, movie begins by showing a dead little girl in a large suitcase, her stuffed animal tossed in with her and the luggage later zipped. Kids are shown tossed into a river; autopsy photos of corpses are displayed on trial. Longo describes how he killed his wife.

The truth will eventually come out.