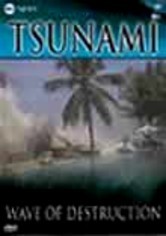 2005 NR 0h 51m DVD
The giant wave of water that devastated much of Southern Asia's coastline and claimed hundreds of thousands of lives in December 2004 is examined in this heart-wrenching profile. Charles Gibson hosts this documentary that explores the science behind tsunamis and details the massive relief efforts taking place in the region. Also included are harrowing tales from survivors and Diane Sawyer's visit to children orphaned by the disaster.