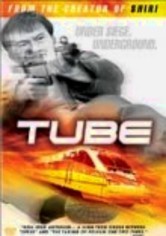 2003 R 1h 56m DVD
Talk about everything going down the tube! A former government agent turned terrorist (named T) is being trailed by his former associate (named J). They happen to meet in a subway train during a busy weekday rush hour, and it's up to J to keep T from blowing everyone in the car to kingdom come. It's action Korean style in this over-the-top film directed by Baek Woon-Hak.