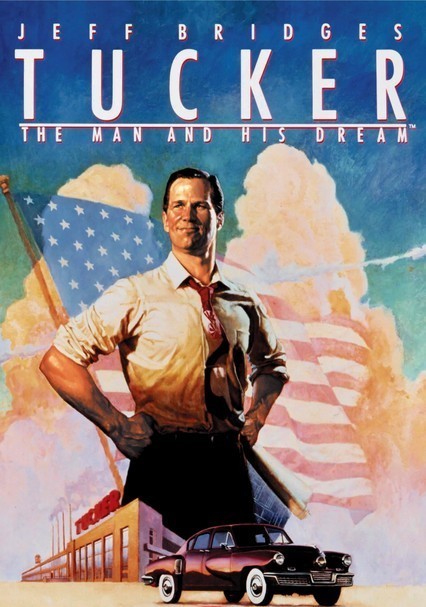 1988 PG 1h 50m DVD
Unimpressed with the cars being built following World War II, Preston Tucker dreams of building a more stylish car. But even with the help of his business-savvy wife and mechanic son, Tucker faces roadblocks -- mainly from the auto industry itself.

Parents need to know that while this movie is set in the 1940s and 1950s, there's considerable drinking, smoking, and swearing. There's also some kissing. Expect discrimination typical of the era: Abe calls Preston's partner a "Jap," and Preston says Jimmy's family is all in a relocation camp. Characters also use the phrase "New Yorker" to mean "Jewish" when speaking of Abe. And Bennington calls Vera "the little woman" in a belittling way. Also, some images of people killed in car accidents and bloodied may be too much for younger or more sensitive viewers.

Preston and Vera kiss and later make out on a bed (clothes on).

A car rolls with someone in it (no injuries). Preston shows photos of people killed in car accidents. A woman faints. A fire starts under a car.

Someone calls a Japanese man a "Jap" and the way characters use the phrase "New Yorker," it's clear it's a stand-in for "Jew." Characters demean women, calling Vera "the little woman." Reference to Abe having served a prison sentence.

Most characters smoke constantly, including Tucker and Vera. Men smoke cigars. Characters drink martinis and champagne. Tucker and other men drink liquor from a bottle.