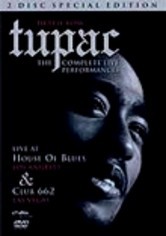 1996 NR 2 discs
Combining the only two of Tupac Shakur's concerts that were filmed, this rousing live footage showcases the talent of one of the best-selling hip-hop artists ever to perform. Both events -- a House of Blues show and a never-before-seen performance from Las Vegas's Club 662 -- occurred in 1996. Songs include "So Many Tears," "Murder Was the Case," "Gin and Juice," "Nothing But a Gangster Party," "California Love," "All About You" and many more.