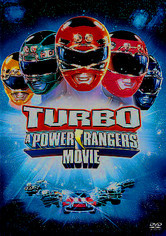 1997 PG 1h 39m DVD
Wicked space aliens are out to destroy Earth, and the Power Rangers must step in before it's too late. The leader of the gang of aliens, Divatox, is about to release the sinister power of an intense being called Maligor, currently held captive at a volcano on the island of Muiranthias. Can the mighty Power Rangers get there first and save the planet?

Parents need to know that Turbo: A Power Rangers Movie is a 1997 movie in which there is frequent fantasy-style violence. Characters are constantly doing battle with fists, feet, and crossbows. There also are moments of peril; for example, one of the Power Rangers is nearly choked by a large snake, and after she escapes she hangs from a branch high over raging rapids. Aside from this, the primary antagonist is dressed in an outfit in which her breasts look like they're going to pop out at any time. This same protagonist eats a fly on her leg and makes a big production of chewing it. In another instance, one of the characters makes a joke about passing gas. All in all, the bad costumes, dated special effects, and subpar acting make this installment of the Power Rangers best for the biggest fans of the enterprise only.

Frequent fantasy-style fighting; characters frequently punch and kick their way through their enemies. Frequent peril: A snake nearly chokes one of the Power Rangers, who escapes it but then hangs from a branch high over raging rapids. Characters use crossbows for fighting. A ship blows up and is engulfed in massive computer-animated flames. Characters dangle precariously over a river of lava; one character is thrown into it by the main antagonist.

One of the Power Rangers proclaims, "Hells bells!"

An argument could be made that the Power Rangers employ teamwork and cooperation through talk and example when standing up to their enemies.

The Power Rangers also are a collection of toy action figures and toy accessories still available for purchase in toy and department stores.