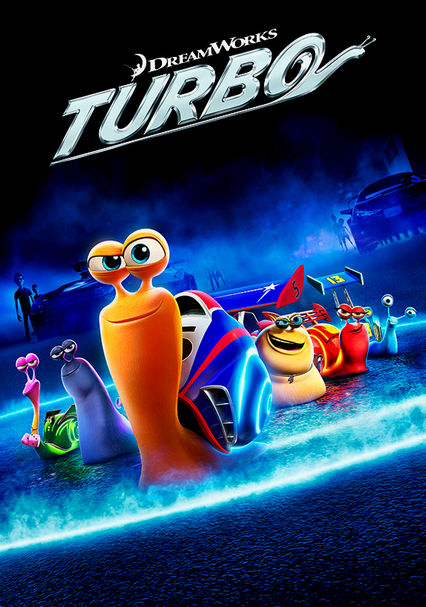 2013 PG 1h 35m Blu-ray / DVD
A speed-obsessed snail who dreams of being the world's greatest race car driver gets his chance when a freak accident imbues him with high-octane speed. But he soon learns he'll need the help of his friends if he's going to go the distance.

Parents need to know that Turbo is a funny animated underdog comedy with strong positive messages. Themes that run throughout the movie (and are reinforced constantly) include believing in yourself, following your dreams, and never giving up. Kids will find the silly characters endlessly amusing, with only a little bit of innuendo, stereotyping, and potty humor to contend with. The biggest concern is the repeated scenes of peril, in which the beloved snails seem to be in danger thanks to a lawnmower, a busy freeway, plentiful crows, and a car crash. But all scenes involving major characters are resolved positively.

One scene in which a group of male snails makes comments while looking at something -- "nice curves," "giant juicy temptress," etc. -- but it ends up being a tomato. A female snail flirts briefly with a male snail, and later they seem to be a couple.

Several scenes that are perilous but not super scary, including a snail's encounter with a lawnmower, a dangerous trek past a freeway and through urban streets, and a big car crash in which folks are dazed but not seriously injured. Several scenes in which a crow swoops down and picks off a snail, presumably ending in death to the snail. A crow gets hit by a bus. Some comments about someone being "dead meat" or being "slaughtered," which the snails take as threats -- but the comments end up being innocuous.

The movie is steeped in positive messages, which are reinforced repeatedly: "No dream is too big, no dreamer too small." Plus, never give up, believe in yourself, and make the most of today. It also emphasizes the importance of having supportive friends and family. On the downside, there's a little bit of weight-related humor at the expense of a large snail who can't fit back into his shell.

Product placement includes Chevy, Verizon, and HP. There are off-screen licensing deals in place as well.

In one scene, adults seem to be drinking bottled beer with their meals.