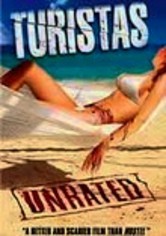 2006 UR 1h 36m DVD
In this gripping thriller from director John Stockwell (Blue Crush), a backpacking trip in Brazil turns dangerous for Alex (Josh Duhamel), Pru (Melissa George) and four of their college pals when they find themselves held captive by a radical military gang. The terrified friends fear they may never make it home alive when their captors prove that they'll do anything it takes to complete their ruthless mission.

Parents need to know that this torturous (literally and figuratively) horror movie is absolutely not for kids. It's full of gross-out violence -- the sort characterized by yucky wounds and bloody body parts. Violent acts include a stick in the eye, a hook in a foot, shooting, knifing, and surgery (depicted here as sadistic). The insidious motive for the murders is organ harvesting, described in some detail as a problem of class/nation inequities and depicted brutally. Characters engage in reckless sexual pursuits, though the one couple who actually have sex (off camera) use a condom. Characters drink, smoke cigarettes and pot, and are drugged by murderous villains. Language is pretty much incessant, including repetitive uses of "f--k."

Girls' breasts are exposed while they're swimming and during organ harvesting surgery; girls appear repeatedly in thongs, bikinis, and sheer or net garments; brief kissing while characrters are plainly drunk/high; post-sex dialogue demonstrates the guy's surprise when the woman turns out to be a prostitute (she takes money from his wallet); girl in the shower (shoulders up); reference to sex with "girls" in Cambodia; reference to sex "up the ass."

Lots of bloody violence in close-up, including a lengthy surgery scene (liver and kidneys removed from girl, with explicit cutting and slopping); weapons include machete, metal hook, rocks, guns, jackknife; film opens on close-up of a girl's eyes and bloody surgical instruments as she pleads for her life, then screams (fade to credits); bus falls off a mountainside, leaving passengers without transportation; rock thrown at young thief makes his head bleed (and he cries); character hits head on rock in water (wound bleeds and appears in gross-out close-ups, including when Finn staples it, causing great pain/yelling); girl's fall off a cliff is shown in graphic detail (sound and image); menacing sequence as tourists explore a house (dark corners, suspenseful music); scary sequence in caves, as tourists swim to escape brute (dark, fragmented images); girl fights man by clawing and biting (bloody teeth); explicit effects of shooting (chest, head).

Tourists are reckless and arrogant and drink, do drugs, and engage in sexual activity with virtual strangers; psycho-villain doctor is delusional and cruel; impoverished natives are vengeful and greedy. Victims are all priveleged white travelers; bad guys are dark-skinned natives.

Someone orders a Coke.