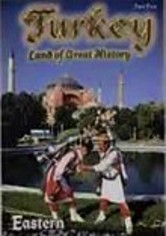 2005 NR 1h 0m DVD
The second installment of this two-part Turkey travelogue series explores the splendor of Istanbul, which was once considered the gate between the Orient and the Occident. Flying past the city, you'll see Ephesus and Pergamon, the terraces of Pamukkale and the island of Sámos. Later, you'll soar over picturesque bays to take in the monuments of Xanthos, and you'll observe the fascinating process of Oriental rug making.