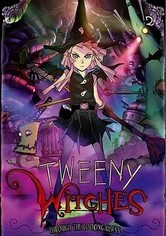 2004 NR 2 discs
The adventure continues as Alice makes her way through Witch World in this hit anime series. Insisting witchcraft be used only for good, Alice frees magical beings from captivity and spreads a benevolent message throughout this enchanted land. But her efforts to reform the place are put on hold as a new threat emerges -- a threat that could spell destruction not only for Witch World, but for the Warlock Realm as well.