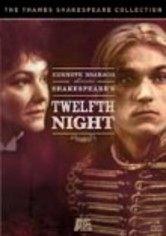 1988 NR 2h 45m DVD
Filmed for British television, this 1988 production of William Shakespeare's gender-bending comedy stars Frances Barber as Viola, who takes advantage of a chance to start over by disguising herself as her presumed-dead twin brother. But the cross-dressing deception leads to a romantic muddle when she goes to work for a lovelorn nobleman (Christopher Ravenscroft). The solid cast also includes Richard Briers and Caroline Langrishe.