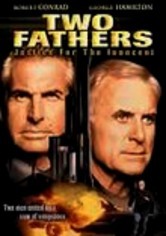 1994 NR 1h 34m DVD
Two Hollywood hunks from an earlier era -- the always bronzed George Hamilton and TV's James T. West, Robert Conrad -- play fathers whose children have been murdered by the same man in this made-for-TV drama. When the killer escapes from prison, these two disparate men -- one a blue-collar widower from Chicago, the other a wealthy Boston businessman -- must work together to put him back behind bars.