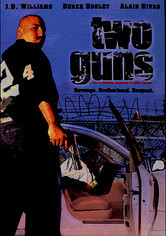 2004 NR 1h 21m DVD
When Bill Holland finds out that his big brother, Jesse, was murdered while eating at a local restaurant, he spirals out of control, and his relationship with his grieving mother becomes strained. Unhappy with the pace of the murder investigation, Bill and a friend take matters into their own hands, getting involved with some shady characters in an attempt to find Jesse's killer. Costars J.D. Williams, Derek Dooley and Mark Rosenberg.