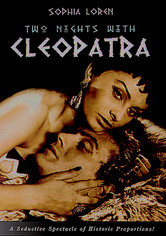 1953 NR 1h 21m DVD
In this 1954 comedy, siren Sophia Loren plays two roles: Cleopatra and the slave girl who doubles for her. Every night, the Egyptian queen beds the soldier who guards her door, but the price he pays is his life. So, when a Roman soldier (played by Italian comedy king Alberto Sordi) is placed on Cleopatra's detail but becomes smitten with her look-alike slave instead, romantic complications put a wrinkle on this strange tradition.