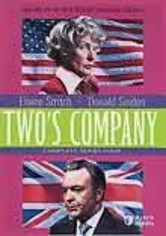 1978 NR 2h 48m DVD
While a few of the elements may sound familiar, this popular British sitcom is nothing like "Who's the Boss?" -- or "Three's Company," for that matter. When an acidic American author (Elaine Stritch) hires a proper English manservant (Donald Sinden), they butt heads, trade well-worded insults and generally skewer each other's countries. In the fourth hilarious season, Frank Middlemass, Bernard Kay and Renée Asherson make guest appearances.