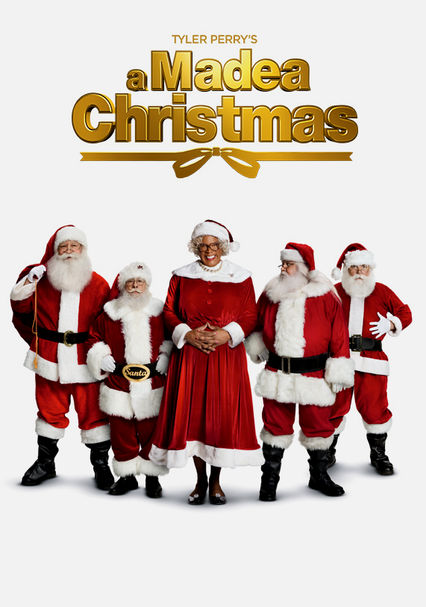 2013 PG-13 1h 45m Blu-ray / DVD
When Madea is coaxed into helping a friend pay her daughter a surprise visit in the country for Christmas, the event takes a turn for the best as Madea dispenses her unique form of holiday spirit on the rural town.

Parents need to know that Tyler Perry's A Madea Christmas is a holiday comedy featuring Perry's signature character, Madea. Based on Perry's Christmas play, the movie features issues like religious versus secular celebrations of Christmas, interracial relationships in the deep South, and honesty between parents and children. Language includes "damn," "hell," "whore" and other insults, and there are several references to and jokes about sex (mentions of a whorehouse, Viagra, foreskin, role playing, etc.) and race (KKK meeting, disparaging remarks about rednecks, and the horrified way a black mother acts when her daughter reveals she's married to "the help"). As for the holiday cheer, the movie advocates for religious representations of the season and for accepting that love shouldn't see color or class.

Madea makes a joke about being "horizontal" with two famous Civil Rights activists. Lacey and Conner kiss a couple of times. Buddy makes references to Kim's behind, boobs, and sex life. They are "caught" playing a game where he covers himself with a sheet and looks like a ghost in bed, but they're interrupted before anything risque happens. References to "red light district," the town whorehouse, foreskin, and lingerie.

Madea makes a joke about shooting someone who tells a racist joke. She's frightened after stumbling into a KKK meeting. A man is in a car accident and is saved right before his truck catches fire. A father seems borderline abusive to his son and his wife. Madea jokingly threatens to punch and kill people.

The movie's best message is that love is color blind, and that you fall in love with a person, not their entire race. But the movie also has positive messages about the importance of being honest with your parents (and vice versa), how you should never humiliate or act ashamed of the person you love, and how Christmas is both a religious and secular holiday.

Madea jokes that she used to sell trees that make you happy when you smoke them; later she asks if the farm is growing marijuana. Jokes about Viagra and family moonshine.