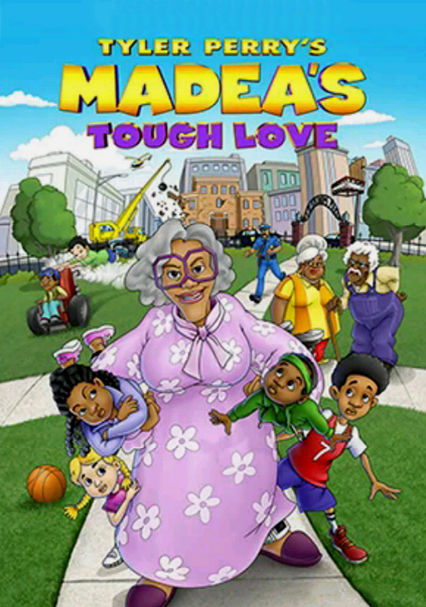 2014 PG 1h 5m DVD
Madea is more animated than ever in this all new movie! With her hilarious mix of sass and wisdom, Madea rallies a group of local kids to save their youth center and proves that behind her tough exterior is a whole lot of love!

Parents need to know that Tyler Perry's Madea's Tough Love is a slapstick, animated version of Perry's continuing series of popular "Madea" films. Madea, an African-American, white-haired, comic busybody, is played by (or, in this case, voiced by) male actor Tyler Perry. Past live-action movies have some mature themes, but this one has been designed for a younger audience. Madea's goal is to save the Moms Mabley Community Center, a refuge for adorable street kids, and share life-affirming lessons with her charges. Madea has a number of skirmishes with local police (Madea calls them "po-po"), but it's good-natured and the police are always good guys. Requisite rude insults ("blockhead," "stupid," "you look like a fart") go along with some potty humor (body odor, wet pants, and pee jokes). The cartoon action includes speedy car chases, Madea pummeling the feckless Joe (a regular "biddy's buddy"), and ceilings falling in. One nightmare sequence has some scary visuals: Shadowy ghost-like figures menace two kids, and a little boy falls into black. Key characters are African-American.

Some insults and bodily function humor: "blockhead," "shut up, old lady," "stupid," "hell ... o," "you look like a fart," "whup their butts." The initials P-E-E are used as a lengthy joke; someone is shown with wet pants.

Madea has solid, common-sense messages to offer. Central to this story is, "If you don't try, you've already lost." Other maxims: "You can't run from who you are." "If you're mad at the world, the world won't care for you either." "Recognize when someone cares about you." "Don't run from the po-po [Madea's term for "police"]." "Make a difference without making a mess."