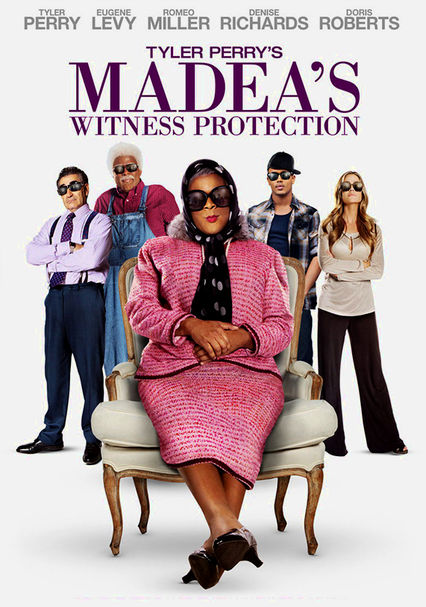 2012 PG-13 1h 54m Blu-ray / DVD
After a Wall Street Ponzi scheme sends George Needleman and his family into witness protection, Madea's home becomes a haven ... of sorts. But with her tough love and sass, they just might outsmart the mob and change everyone's life for the better.

Parents need to know that Madea's Witness Protection -- part of Tyler Perry's popular, long-running Madea franchise -- serves up more of what audiences have come to expect from the series: a righteous Madea putting people in their place. This time it's a Bernie Madoff-like character (only he doesn't know anything about the crime and was just set up) and his family, who have to hide in Madea's Atlanta house for safety. Expect some light cursing (mostly "hell" and "damn"), some sexual references/innuendoes (mostly about strippers and body parts), a few slaps, and plenty of exhortations about the right way to behave.

An old man ogles a young woman; a man and a woman reminisce over a one-night-stand decades earlier, and Madea talks about her days as a prostitute and stripper. Many double entendres and crude remarks (using language like "bang" and "screwed"), and a woman declares that she wants sex. References to body part size; some tight/revealing clothing.

A man uses a gun to try to hold up a retiree, but the plan goes awry. A woman drives a car like a maniac to scare off a passenger. A family is sent a dead rat as a fear-raising tactic. Madea sometimes slaps people.

Madea's message is clear: Be a good citizen, old or young, and the world is a much better place. Also, don't take any guff.

Some mention/appearance of brands including Gucci and Singer.

Some mentions of drugs and cigarettes; Madea wants a drink (or several) while flying. A bottle of champagne is seen.