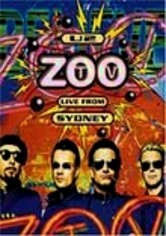 1993 NR 1h 56m DVD
U2 floods the stage with an elaborate celebration of multimedia and pop culture in this 1993 concert -- featuring a special appearance by Bono's devilish alter ego, MacPhisto -- filmed at Australia's Sydney Football Stadium. The smoldering set list includes classic songs such as "Mysterious Ways," "One," "With or Without You," "The Fly," "Where the Streets Have No Names," "Bullet the Blue Sky," "Running to Stand Still" and "Love Is Blindness."