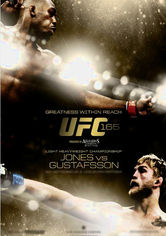 2013 NR 2h 4m DVD
The most dynamic force in mixed martial arts, Jon "Bones" Jones has ripped through a series of the sport's most revered fighters since winning the UFC light heavyweight title in 2011. Sweden's Alexander "The Mauler" Gustafsson gets his long-awaited shot at the 205-pound championship in the main event of UFC 165.