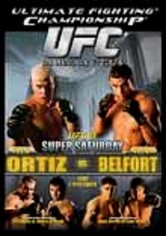 2005 NR 2h 20m DVD
Fans of Ultimate Fighting can see the match they've been waiting for: "Huntington Beach Bad Boy" Tito Ortiz battles Vitor "The Phenom" Belfort at Las Vegas's Mandalay Bay Resort and Casino in a rematch of their 2001 fight, during which Belfort had to bow out because of an injury. Also, former champion Tim Sylvia fights Andrei Arlovski for the Interim Heavyweight Championship, and the undercard bout features Pete "Drago" Sells vs. Phil Baroni.