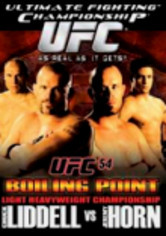 2005 NR 2h 20m DVD
The Ultimate Fighting Championship, a mixed martial arts event that pits the world's best combatants against one another, unfolds before a sold-out crowd at the MGM Grand in Las Vegas. A fast-action program of eight exciting fights features matchups between Chuck Liddell and Jeremy Horn, Randy "The Natural" Couture and Mike Van Arsdale, Diego Sanchez and Brian Gasaway, and Georges St. Pierre and Frank Trigg.