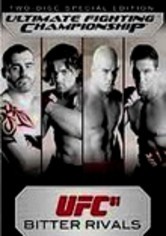 2006 NR 2h 20m DVD
Sin City serves as the backdrop for this raft of mixed martial arts battles culminating in the UFC Heavyweight Championship bout between Tim "the Maine-iac" Sylvia and Andrei "the Pit Bull" Arlovski. In other action, archenemies Tito Ortiz ("the Huntington Beach Bad Boy") and Ken Shamrock ("the World's Most Dangerous Man") engage in the ultimate grudge rematch.