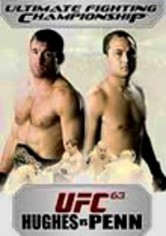 2006 NR 2h 20m DVD
After losing to B.J. Penn at UFC 46, UFC Welterweight Champion Matt Hughes gets another chance to conquer the Hawaiian at UFC 63. Held in September 2006 at Anaheim's Arrowhead Pond, this ultimate fight event also features a thrilling showdown between Mike Swick and David "the Crow" Loiseau, plus seven other bouts. Undercard match fighters include Rashad Evans, Melvin Guillard, Jens Pulver, Jason Lambert, Jorge Gurgel and many others.