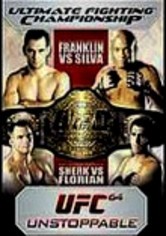 2006 NR 2h 20m DVD
Witness the no-holds-barred action of UFC as middleweight and lightweight contenders battle for the championship in this mixed martial arts extravaganza held at the Mandalay Bay Events Center in Las Vegas. Middleweight champ Rich Franklin defends his title against Anderson Silva, and Kenny Florian and Sean Sherk face off for lightweight bragging rights. Other bouts include Jon Fitch vs. Kuniyoshi Hironaka and Justin James vs. Clay Guida.