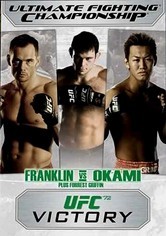 2007 NR 2h 20m DVD
UFC Middleweight favorite Rich Franklin and Yushin "the Wolf" Okami square off at The Odyssey in Belfast, Northern Ireland, in a match that won't soon be forgotten. Can Franklin beat off the Wolf, or will the newcomer establish a new domain? Additional featured bouts include Forrest Griffin vs. Hector Ramirez, Tyson Griffin vs. Clay Guida, Jason MacDonald vs. Rory Singer and Ed Herman vs. Scott Smith.