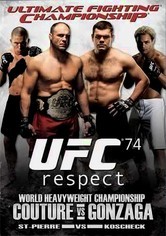 2007 NR 2h 20m DVD
Contenders from every corner butt heads -- and essentially beat one another to shreds -- in the 74th consecutive Ultimate Fighting Championship, filmed live at the Mandalay Bay Events Center in Las Vegas. Highlights include a main event matchup between UFC heavyweight champ Randy Couture and challenger Gabriel Gonzaga, who famously won the title at UFC 70 by knocking out Mirko "Cro Cop" Filipovic.