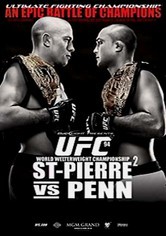 2009 NR 1h 50m DVD
Relive the exciting 2009 grudge match between Ultimate Fighting Championship superstars B.J. Penn and Georges St-Pierre, who eked out a narrow victory over Penn in 2006 and went on to become the UFC welterweight champion. Here, Penn is ready to deliver some payback in this mixed martial arts event filmed live at the MGM Grand in Las Vegas. The evening's card also includes action from Thiago Silva, Jon Jones and other UFC fighters.