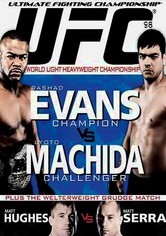 2009 NR 2h 50m DVD
Fans of Ultimate Fighting Championship action will thrill to this unprecedented bout as Rashad Evans and Lyoto Machida enter the arena in Las Vegas. The winner goes home with the light heavyweight title -- and the loser with his first-ever defeat. Also featured are a brutal grudge match between Matt Hughes and Matt Serra, a slugfest between Sean Sherk and Frank Edgar and a fierce middleweight contest between Chael Sonnen and Dan Miller.