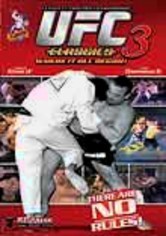 1994 UR 1h 29m DVD
Travel back in time to catch some of the earliest battles of the extreme mixed martial arts event known as the Ultimate Fighting Championships -- before there were hard-and-fast rules. The third volume of a multidisc series features matchups between Ken Shamrock and Felix Mitchell, Royce Gracie and Kimo Leopoldo, Harold Howard and Roland Payne, and Keith Hackney and Emanuel Yarborough, who weighs in at a whopping 620 pounds!